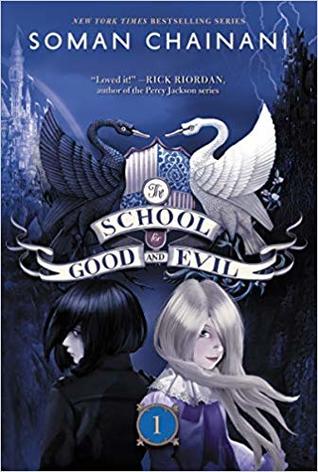 The School for Good and Evil by Soman Chainano (Illustrated by Iacopo Bruno)
Publication date: May 14, 2013
My rating: 2 stars

*spoilers are marked in purple*

To be honest, I wasn’t sure how to rate this book.
On one hand, it took me 130 pages (yeah, I counted) before I actually started being invested in the story (before then I was only mildly intrigued and pushed myself through because I wanted to like it, but I was actually really close to DNF it). After 130 pages I finally started to get more engaged and like it more, but then it lost my attention again towards the middle only to regain it again towards the end. So… yeah it was kind of up and down? Not that anything I read was boring, otherwise I would have totally DNF it, it was actually quite compelling me to read until the end, I just wanted things to happen faster I guess.

My main pet peeve is overly descriptive books and one of my favorite things is fast paced/easy to read dialogue, and this book was literally a combination of those two so you see how confused I was at partly liking partly disliking it.

By the way, it seems the author is a film director and I could actually see this through the book at times, as some of the scenes seemed very movie like.

A thing that confused me at first was the narration as sometimes it seemed to describe things from a bunch of people POVs in the same breath, until I realized it was an Ominiscent Narrator (had to google that one, I almost never see that type of narration in the books I read).

I enjoyed both characters!
I’m actually glad I knew some things about the characters before going into this book because I could then see it through a broader perspective of it being a character development story that takes place through the whole series, which is why Sophie, to me, was a very entertaining character even though her traits seem annoying and terrible. I mean she was obviously meant to be just that but this is why I liked reading about her, knowing a character development is underway.

Agatha was my favorite of the two, and I loved seeing her starting to come into herself eventually, only I actually wanted more Agatha POV than Sophie POV since it seemed to be the other way around, but the ending actually made me realize why that was so it’s all good!

My favorite moments in the book were:

When Agatha learned that she was beautiful all along, that beauty was on the inside. It was just so heartwarming to watch her come into herself.

When Tedros rescued Agatha and was all "A princess that and a princess this" and Agatha was "I'm not a princess!" and then she saw her own blood, fainted, and Tedros smirked saying "Definitely a princess" 😂

As for Tedros, I’m definitely looking forward to more exploration of his character, as well as more depth to his and Agatha’s romance considering how cringy it is at the moment.

“My behavior last night was poor."
"Poor?" Agatha coughed. "You pushed me through a window!”