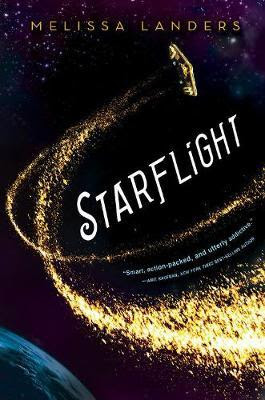 Starflight by Melissa Landers
Publication date: February 2, 2016
My rating: 2 stars
This was... okay.Literally, it was just "okay".Though I do admit that it was occasionally funny, and the writing was pretty easy to read.I didn’t connect to any of the side characters. I felt like they were just sort of… there to move the plot along but it never felt like Solara and Doran bonded with them either. So really I mostly just invested in this for the Solara-Doran relationship as they went from despising each other, to reluctant allies, to not reluctant allies, to friends, to lovers. But it did take me 100 pages before I went from considering to dnf it to being invested in it.
However, I did find myself skimming a lot so I wasn't that invested.Honestly, everything at the end felt really abrupt and rushed.
*Spoilers from now on*
Yeah, um, I was not a fan of the “twin brother who everyone thought to have died discovered alive and sort of evil” plot twist. I’m sorry, it just, it’s hilarious, I can’t take such tropes seriously 😂 Theoretically it could be done well/cleverly, but usually the trope is portrayed as so cliche it half makes me roll my eyes and half makes me want to laugh in a “what the heck 😂” sort of way. I didn’t want to rate this book 1 star because that’s a rating for books I truly hated and I didn’t hate this one, but boy was I tempted when his twin brother showed up.

"Scoot over," she whispered.
The mattress shook with his movement.
"A little more," she said.
"If I get any closer to the wall," he hissed, "I'll have to buy it dinner."