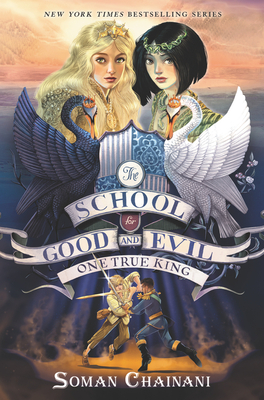 One True King by Soman Chainani
Publication date: June 2, 2020
My rating: 3 stars
Spoilers are marked in purple.
The End of Ends.
The work is done.

But personally, I feel like it's only the beginning for those characters, even if we aren't going to see their next adventures.

This was such a fun journey. I'm glad I decided to stick to reading those books and didn't give up even though they did frustrate me at times. Because at the end of the day, they were fun and magical and really absorbed me into this story and characters.

It's actually a shame I didn't read these books when I was a teen because I think they would have meant much more to me then. Still, it doesn't matter how old you are, you can always read and enjoy those stories.

This is the first book in the series where I actually wanted more Sophie and less Agatha.
Up until now, Agatha was my favorite character and POV alongside with Hort (And Nicola in later books – I love that clever girl, she deserves a happy ending!), but I kind of felt like this should have been more of Sophie’s time to shine than Agatha, to be honest. Especially since she and Hort were FINALLY sailing, it felt really abrupt not to let them more page time and it really upset me because Tedros x Agatha had page time from book 1 but not Hort x Sophie and I just wanted MORE of them.

(I seriously fangirled over the few Sophie x Hort scenes, especially the one at the end!)

There’s been SO MANY deaths in these books. So many beloved characters that I wish the author has kept alive – seriously, sometimes I felt like he was overdoing it like with killing one character after the other hardly leaving us with any adults left – but despite being sad about them none had made me tear up like when Merlin died at the very end 😭 GAH, NOT MERLIN. I know it’s realistic, I understand it was always where this was going, BUT I LOVE MERLIN.

Also, though the ending was beautiful (yet sad, due to Merlin) I did feel like it was also kind of… abrupt? Maybe it’s just how I perceived it, others will probably say it’s satisfying, I guess it’s just personally it kind of felt like it was a bit sudden.
Bridge to Grace - Without You