The Last Ever After by Soman Chainani - Book Review 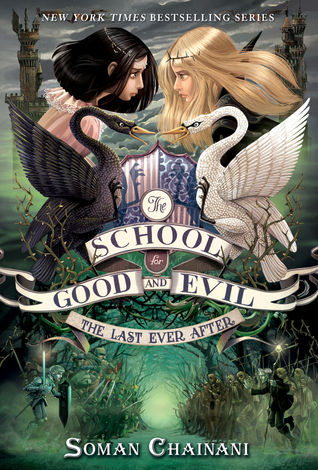 The Last Ever After by Soman Chainani
Publication date: July 21, 2015
My rating: 3.5 stars
Spoilers are marked in purple.

At this point, it doesn't even matter what I rate these books, I am well and truly addicted 😂

Despite having a gripe with things in this series, I just can't stop reading. On one hand, I am often annoyed by some of the characters' traits like selfishness, manipulation, self doubt, self sacrifice, naivete, and of course that thing that frustrated me since book one about how characters seem to constantly change their feelings/motivations to the extremes.

Yet on the other hand, I love seeing the complex character development of flawed characters, I have fallen in love with this dark fairy tale world, and I ship the ships as a hopeless romantic.

Not to mention, so far each book is better than the last, so it only seems to improve. I can really see it in the author's writing too. Much like the characters, it's changing and evolving.

Now let's talk characters, shall we?

Those two. Whew.
For most of the book, I wanted to strangle them.

Agatha's self doubt and Tedros's stubbornness got them into a messy "love triangle" shenanigans with Sophie and the only reason I'm forgiving this is because I was just so happy when they finally got together again, sure in one another. But yeah I will not forget wanted to strangle them for the majority of this book.

Suffice it to say, Tagatha is my favorite ship considering, well, they're the only major ship that shipped so far.
Though... I get the feeling from the next books that we are not over with their miscommunication drama OR character development (especially Tedros) so I'm definitely dreading me wanting to punch them in next book, I JUST WANT THEM LOVEY DOVEY OKAY?

So, do you think Aagatha outsmarted her mirror image for the last time? I love how she seems to be the only one able to trick the barrier between schools.

Oh, Sophie, certainly one of the more complex and flawed characters in this book (not that she's the only one, it's just that her flaws are more on the surface than the rest).

To be honest, I never hated Sophie. Oh trust me, I wanted to punch her when she always tried to manipulate Agatha for "her own good" (first to switch schools, then to prevent her from being with her prince, then trying to take her prince for herself), but at the same time I also felt sad and pity towards her.

I'm looking forward to seeing more of Sophie's character development in the future books, and I'm SO wanting to see her fall in love with Hort. Of course, I'm glad she finally feels at ease on her own, but the hopeless romantic in me can't help it.

“What he doesn’t understand is that a coven is a coven and we protect each other to the death.”


GAH, I loved the friendship between the witches and Agatha. A coven is always three but they made an exception for Agatha and I… *tearing up*. It’s the enemies to friends who’ll risk their lives of each other trope that I love to see.

I wanted to see more scenes with them together, though!


THAT BOY. I LOVE HIM SO MUCH.
That poor lonely boy, someone just love him please! (more specifically, SOPHIE love him please!) He also delivered the swooniest line in the series and I was in awe! If Agatha is my favorite female character in the series, then Hort is my favorite male character. As much as I ship Tagatha, I love Hort more than Tedros (though I heard that Tedros is going to go through a lot of character development in the next books so I’m super looking forward to that).

Merlin was hands down the MVP of this book.
Like seriously, Merlin was like this eccentric funny loveable powerful leader father figure to this group and I loved him so much! He was exactly how I would imagine Merlin to be.
He 1) always fed everyone. 2) saved them from Evil every second, making sure nobody dies. 3) saved them from themselves.
I just want Merlin around forever, please.

No one would have won anything in this book without Merlin.

I don't know if he's going to feature in the next books but I'm honestly just SO GLAD he didn't die or anything.

I also want to hurray the other characters for coming to everyone's rescue 🙌
And, of course, a moment of silence for Cinderella for never getting to see Aagatha's happy ending 😭 And for Lady Lesso (I accidentally spoiled myself she was going to die but I still choked up 😭), and all the other characters we didn't even know who died (except for the zombies, the School Master, and Aric).

I'm excited to read the next books!

Savior - Beth Crowly
(This song kind of reminds me of Agatha & Sophie's relationship, but it's honestly just an amazing song)