A Crystal of Time by Soman Chainani - Book Review 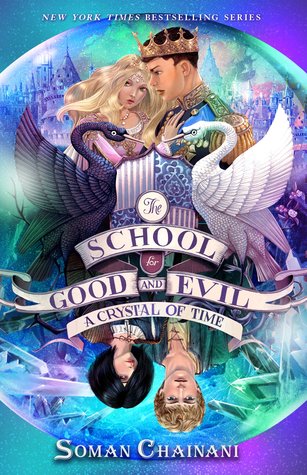 A Crystal of Time by Soman Chainani
Publication date: March 5, 2019
My rating: 3 stars
Spoilers are marked in purple.

I actually don't know what to say.

I'm so excited to dive into the next book that all I can think about it "OMG, I have to know what happens next!"

To me, the first half of the book was the best. It had action, adventure, separated lovers in dire situations trying to reunite, a girl recruiting an army and being a queen, friends saving each other, people sacrificing themselves for others. It was so action-packed and I loved it!
The second half flopped, in my opinion, compared to the first half, but that's just my personal feelings on the matter. It's probably the reason why I didn't rate it higher to be honest.

A moment of silence to Andail’s rat (Andail loves her pets so much), PROFESSOR DOVEY 😭 I’m so glad she reunited with lady Lesso but… 😭 and Sheriff (Poor Dot, despite her difficult relationship with her father, she still loved him). A more tricky one would be Rihan because... on one hand it makes sense to hate him for everything he's done - even if he didn't pull the trigger, he was still the one to put the gun in his brother's hand the told him to shoot, so he's just as responsible, yet on the other hand I actually started feeling sorry for him towards the end... so, I'll mention him.

Get Up - All Good Things

Love is facing the world and its tests together, even if you fail them.