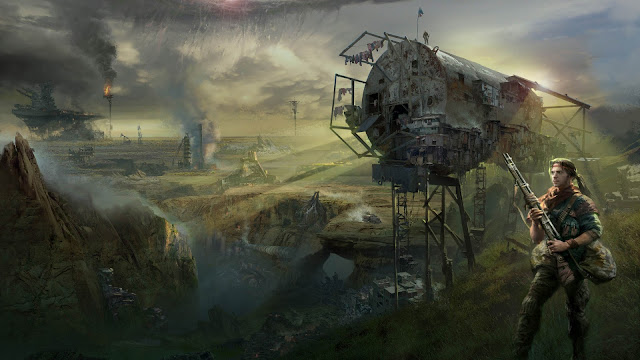 That's me in the picture, by the way.
Yeah, right... I highly doubt I'll look this kickass while holding a gun in the middle of a zombie apocalypse. I would be completely petrified.

I would need one hell of a team to stay alive in the middle of the apocalypse.
Which is why I'm assembling said team in this awesome tag.
That being said... if only those characters were alive in the real world.
You know, I always thought I wanted a cool super-power, something like: controlling the elements or telekinesis, but right now I really wish I had the power to pull characters into the real world.

By the way, I found out about this tag from my BBFF (a.k.a. Best Blogger Friend Forever. Yes, it's totally a thing), Esther from Chapter Adventures.

Now, let's explain the rules of the tag:

Now that we've got that covered, let the tag begin!


#1: First person to die in the apocalypse

Zombie (a.k.a Ben Parish), it would seem.
The Irony of his name in this tag is not lost on me.
I'm sorry, Ben. I did like you quite a lot. I'm sure you did something heroic at the end - like save a teammate. It's really like you to die like that.

#2: The Person you tackle to escape the zombies

Cassie.
What? No... no way I would do that to Cassie.
I love that girl. And anyway, she's way too scary to mess with. I wouldn't want to be the person to tackle her. She would get her revenge.
Maybe it was an accident kind of tackle.
Like... our team was frantically running from the zombies, right after we watched our close friend and teammate Ben get killed. So, naturally, we were really rattled. In our daring escape and in the midst of all the confusion, I must have collided with Cassie.
And that's how it happened.

#3: The first person to be turned into a zombie

Isabelle (from TMI).
Isabelle! NOOOO!
No, no way! Our team mission is to find the cure. We will find it, and when we do... Isabelle will be saved.
I know Simon wouldn't rest until that happens.
How did it happen?
Well, Isabelle is not known for being reckless, expect when it comes to Simon. As we were fending off an unexpected zombie attack, a zombie appeared behind Simon out of nowhere. There wasn't even a time to shout out, so Isabelle lunged forward, pushing Simon away from harm's way, all the while getting herself bit by the zombie.

#4: The person that tackles you to escape the zombies.

Simon (from TMI).
What? That's just not right. It's a totally un-Simon thing to do.
Unless...
Unless he was trying to get to Isabelle who was in troubles.
Still... that's really no excuse to tackle me and leave me to the zombies.

Sadie (from The Kane Chronicles).
LOL.
Sadie may not be book smart, but I honestly can't see her as the team's idiot. She's
deffinitely not an idiot.
It would make so much more sense if Simon was the team's idiot (sorry, Simon!) and Sadie was the one to tackle me as she escaped the zombies (I can actually see her do this).

Carter (Sadie's brother).
Well, he really is smart.
I can totally see him being the brains of the team.
I'm glad to have him on my team. In a pinch, you can always count on Carter for a plan.

Warner (from Shatter Me).
Ha! That would be so weird. The guy is a warrior, not a medic. I can't see him attending the wounded. The idea is laughable.
Then again... he can absorb powers, can't he? Maybe he absorbed the power of a healer and now he can heal.
I suppose it make sense.

Adam (from Shatter Me).
Yeah... no.
I mean... he was in the military so I suppose he knows at least a little bit about weapons.
But I really don't like - or trust - Adam.
I think it would make more sense if we switched Adam and Warner's places.

Dimitri (from The Vampire Academy).
Wow, that's perfect. He's like... and it's like... oh yes, we are so going to win this apocalypse.
With Dimitri as our protector, I have nothing to fear.
I'm starting to love this team of mine.

Rose (from The Vampire Academy)
Hell yes!
I can totally see Rose as our team leader. I would feel so much more safe with her in charge. She's not perfect, she has her problems - but hey, who doesn't?
Being the kickass girl that she is, our team will follow her no questions asked. And with the addition of her sarcasm and humor - keeping up morals is most important too in dire times like the apocalypse.

And apparently, that's my zombie apocalypse team.
No one turned up at the right questions, but overall it's such a great team to have.
Cassie, Simon, Sadie, Carter, Warner, Adam, Dimitri and Rose - all of them skilled and unique in their own way.
Not to mention, our fallen ones Isabelle and Ben.
I couldn't have chosen better characters to back me up as we fight the zombies.
What do you think of my team?
Feel free to do this tag and discover your own team!
Consider yourselves all tagged by me.
I'd love to hear your thoughts! (:
Until then...