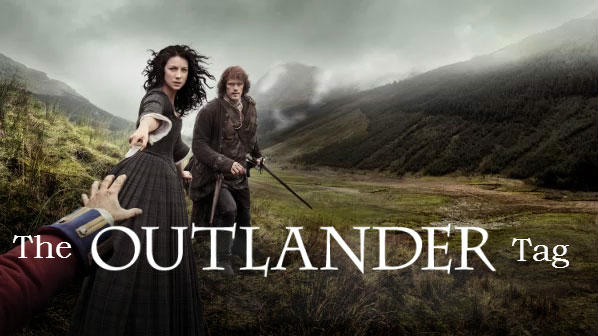 When I saw Kat from the impossible girl blog doing this tag, I just knew I had to do it too.

Confession: I haven't read or watched the Outlander books\TV show. But once I knew I had to to this tag, I started watching the show. I don't think the books are my kind or read but the show on the other hand... I'm only in episode 5 (season 1) and I'm already thoroughly enjoying it.
(Stay tuned for a possible review on my blog Light&Dark).

I'm so excited to dive into this tag!
Shall we?

You touch some standing stones, and you get transported back in time. What year would you end up in?

The 18th or 19th century for some pirate adventures! Sword fighting -  always wanted to see that.

As cool and amazing as it sounds though, let's face it: basically every time I could think of jumping back to, is not exactly woman friendly. Plus, how will I ever be able to survive without technology? We're way too dependant on it these days that we can't even imagine a world without it. My laptop, my kindle, books that didn't come out yet!
So if we're talking about jumping back in time for a few minutes and coming back, I'm in! If not... as cool as it may be, I have to be realistic about it and refuse.

Jumping forward in time, though... I'm so completely in! Just think of all the technology a hundred years from now, all the books! *swoon*.
Don't tell me you never just wanted a time machine to jump forward in time and get an anticipated book.

Claire is a good nurse, but what type of skill would you want a fictional character to excel at?

Knowing how to heal is crucial in every timeline, but also knowing how to fight, how to defend yourself.
I want my fictional character to be clever and excel at fighting (sword fighting, fighting techniques). Also to never give up and fight for what she\he believes in.

Jamie and Claire are the ultimate relationship goals. Who is your favourite fictional couple?

It's basically like asking me what's my favourite book.
How do you ask a shipper 'who is your favourite fictional couple?' There are just so many.
*racking my brain*
I would say... Tessa & Will and Clary & Jace.
Cassandra creates some of the best couples in the history of couples.

The ending of Outlander was shocking. What is one book that you read that totally blew your mind?

Illuminae by Jay Kristoff and Amie Kaufman.
Guys, this book would make you mind explode.
I honestly don't think there will ever be a book quite like it.
It's the most unique I've seen in... ever.
And fun, funny, kickass, amazing...
Mind blowing.

Scotland has lots of castles and we see a few in outlander. What fictional kingdom would you want to live in?

Outlander has some very steamy scenes. What is your favourite romance novel?

Definitely Maybe Someday by Colleen Hoover.
You see, I don't get to read many just romance books. I'm more of the fantasy\science fiction with the additional of romance on the side kind of girl.
But I would read anything - and I do many anything - Coleen will ever write. She's on my 'read first, ask questions later' list.
Maybe Someday is a fantastic, amazing, strong, beautiful story. And the romance? Off the roof. The best book by Colleen I've read so far.

The Jacobite rebellion is a huge plot point in Outlander. What is one of your favourite battles from a book?

Battles scened are hard to write.
You need to get the readers to feel like they're there but without putting in too many details that would confuse them.
Karen Marie Moning (the fever series) does it epically. I love every single battle scene in this series. I love this series in general.
I was so addicted to it, I was smiling like a crazy person throughout all the time of reading it.

Jamie and Clarie get married very unexpectedly. What fictional characters would you like to marry on a whim?

I want Rose & Dimitri and Mac & Barons to elope!
I would so totally be there for that.
Those are some epic couples.

Scotland is a very beautiful place. What fictional world would you love to visit?

I would love-love-love-love to visit the fever series universe. Granted, it takes place in a very real place called Ireland, but it's filled with all sorts of terrifying fictional creatures.
And it's Ireland. I want to visit there so bad.
But not more than... ah, a few minutes. I don't want to be eaten by a shade.

If you could change the past, would you?

While part of your brain screams "YES!", the other part, the one who has seen and read so many time travel, is screaming: "NO!"
everyone has something they want to change - everyone. But I watched way too many shows to know better - changing the past is way too dangerous.
Just by changing a 'small' thing I can cause world war 3 for all I know. And if that's not enough, you'll be the only one to remember it all. And you can't tell anyone because they'll think you're insane.
So... as tempting as it is, even if I could, I won't change the past.

"Imagine your favourite character just barged into your room, grabbed you hand and pulled you into its world."

1. Sabrina from omg books and more books
2. Esther from chapter adventures
3. Irena from book dust magic
4. Suze from with love for books
5. Miranda from mirandas book reviews
And every other blogger who wants to do this tag!

And that concludes my Outlander book tag. Now I must go back to watch more outlander.