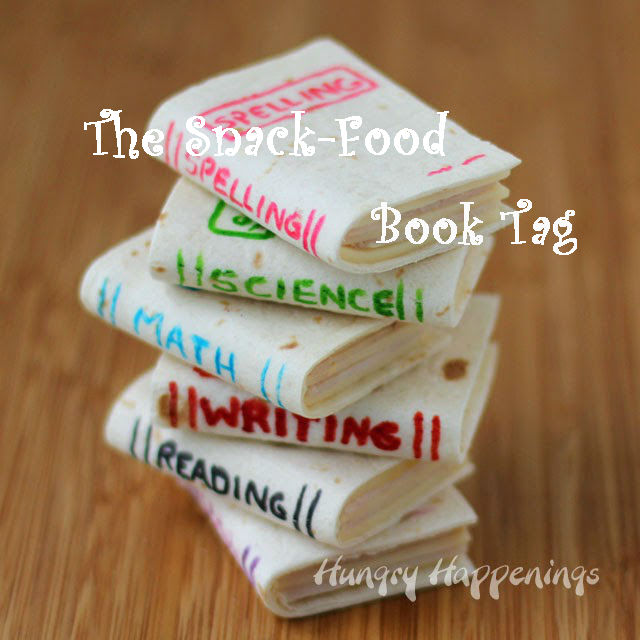 Who doesn't love snacks?
I know I do.

Thing is, I never snack while reading.
I snack when I watch movies and TV shows, but never when I read.
Why?
Because when I read, I'm somewhere else. Somewhere where I don't need to eat or sleep. I'm in a different reality, where I can't concern myself with such mundane things.
If I eat while I read, it will ground me to reality.
And, let's face it... when you're so far deep into the story, you really don't have time for any other distraction other than turning the page.

I may not snack while I read, but I love reading. And I love snacks. And besides, the questions of this tag are way too fun to pass.

I wasn't tagged by anyone but when I saw this tag on Kat's website (The Impossible Girl blog), I just knew I had to do it too.
Ready?

I have to go with Juliette and Warner from Shatter Me on this one too.
I mean, usually when you have a love triangle, both of the guys (or girls) are set to be a love interest. In shatter me, it was "Adam, Adam, Adam" all the way, while Warner was set up to be their mortal enemy. But then, in the second book, things started to switch completely. Don't get me wrong, I totally ship Juliette and Warner (never particularly liked Adam, even before the third book). How it happened, though, was just very unexpected. In the kind of way that I was "what? really? wow, I did not see them coming. But... well, I have to admit, they do make a swoon worthy couple."

*Prungales (see what I did there? The name is a trademark so I couldn't use it) - An addictive book you can't get enough of*

The fever series by Karen Marie Moning should come with the warning: "be prepared to walk into an addiction path."

During the week I marathon the first 5 books in the fever series, I was walking around all giddy, excited and basically bookaholic.
They do say a good books increases happiness (it's a very scientific fact). The fever series did more than just increase my happiness.
*Happy sigh*, just thinking about it makes me all excited again!

When I finished the first half of the series I all but declared: "That's it, I'm moving to Ireland."

*Trail mix - A book with a variety of characters*

For me, a book with more than 2 POV's can get frustrating. How can you connect with the characters if there are so many of their POV's you can hardly keep track?
So I usually don't get into a book with more than 2 POV's.
But then I read The Lunar Chronicles. Slow paced, yes, but once you hit book three, you're a fan. No going back.
As the series goes on, we follow more and more POV's and... well, it works. It really does. And that's coming from someone who doesn't like more than two POV's.
The Lunar Chronicles was such a great series.

Hmm... Hmm... Hmm...
I can't believe it, but no one comes to mind.
Maybe I've never read an unpredictable character?
Yeah, right. Not possible. I'm sure there is someone but I just can't seem to remember.

Okay, I have one in mind. Maybe not exactly unpredictable but more like... unexpected?
Mark Blackthorn from The Dark Artifices.
Unexpected indeed. I can still remember that scene I nearly fell off the couch... *shaking my head*. Spoilers. My lips are sealed.

I actually don't like Popcorn.
I know, *the horror!*
Whenever we go to the movies, I always order nachos and avoid the Popcorn.
Sorry to disappoint all the Popcorn lovers out there!
I'll answer the question anyway because it's a fun one.

I know I shouldn't have, but I loved the darkling from Shadow and Bone. When I got spoiled that he-- well, those of you who read the books know what I'm talking about... I couldn't - I wouldn't - read the rest of the trilogy. I knew how it was going to end and I... I just didn't want that. *sigh*. I admit, I was too far gone into the darkling spell.

And that's it for the Snack Food Book Tag.
I had fun. Did you?
Well then everyone, have a great June reading (:
And I'll see you in my next post.
Which will be soon.

3 doors down - Round and Round

"The problem was she believed in happily ever afters, and the truth was much more bitter. She couldn't pick the boy in this story, and she couldn't pick herself. She had to pick the rest of the world, because she was the only one who could."