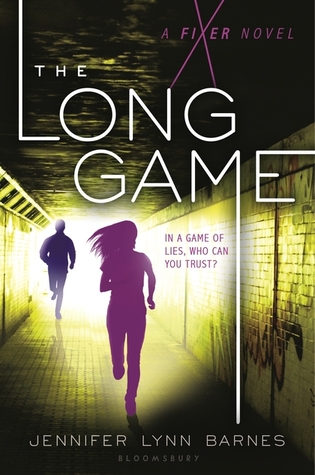 Maybe I've gone too long without reading (three months, people! Three excruciating months), but this book had me captivated from start to finish.
I don't think it's the case, though; my heart was pounding so hard in my chest and my mind is still whirling, trying to form coherent thoughts. To say The Long Game left me speechless would be an underestimate.
I feel like I ran a marathon. An emotional one. A treacherous one, full with twists and turns. In the dark.
Yes, I think that describes The Long Game best.

Being it the second book in The Fixer series, I can't tell you all that much about it without spoiling anything. So... read it and then come back and tell me all about it. Believe me, you'll have a lot to say.
Okay?
Great (:
Let the spoilers begin.


This book was way more hardcore regarding action and deaths than The Fixer and The Naturals series.
What Tess went through in this book... there was a point I seriously wondered how she's still standing. Tess is a strong character, but I had no idea how she was ever going to get through this.
Things went insane quickly, and only escalated from there.

My heart was pounding like crazy. I felt like I was right in there with Tess the whole time. And then came the big plot twist, the one we have in every Jennifer bok, delivering the finish blow.

81% in I just had to put the book aside and take a breath. I was pacing back and forth, on edge, trying to calm myself.
Sometimes, at a certain point in a book, you just have to put it aside, compose yourself, do something else, organize your thoughts and come back to it refreshed.
The emotional torture was up in the sky with this book. I just had to put it down and try to relax before coming back for some more emotional torture.
Not that it helped, because I couldn't stop thinking about the book. So I ended up picking it right back up.

Can we please talk about the big betrayal?
Because I'm freaking the hell out here.
That moment, when Henry captured Tess with the terrorists - minutes after their movie worthy kiss, may I add - I'm pretty sure my heart stopped beating for a second.
I did not - I could not - see this one coming.

Honestly? I don't know whether to pity or despise Henry. I think it's both. I get it, I understand - they took advantage of his fragile state of mind but still... still.
"I won't let anything happen to you."
*Laughing bitterly* Oh, really? She watched people murdered in front of her very eyes, had been through hell and back, lied, betrayed and manipulated the people she cares about so no more get killed and not to mention She had been hurt and held on gunpoint the whole time.
Do not make promises you can't keep, Henry. All it does is make me despise you more for what you've done.

But then... then, he jumped in front of a bullet to save Tess.
He loves her. She loved him. I love them both individually and together. But what he did - what he let happen - is unfathomable.


"This secret stays with us," I said, tailing my fingers over his jaw one last time. "But Henry? You and I are done."


I expected nothing less. I can't forgive him either. Not now, not after everything that happened.


I love more than just the romance, the fantasy, the humor, the light and fun moments in books. I also love the bonds - the bonds between friends, the bonds between family. And the bonds in The Long Game (Tess & Ivy, Tess & Adam, Tess & Vivvie & Emilia & Asher, even Tess & William) warmed my heart.

In a Jennifer Lynn Barnes style, just when you thought everything is finally over - the bad guys lost, the good guys are alive (more or less) - another piece of the puzzle is revealed, another mystery, a part of an even greater mystery, connected to a much bigger puzzle.

Jennifer Lynn is quickly becoming a mastermind of weaving a perfect story of mystery and action that makes your mind spin and your heart beat faster.
And I do mean it in the best kind of way.

Fall Out Boy - The Phoenix

"Tess, has anyone ever told you that you're an absolute vision when you're plotting something?" Asher Rhodes shot a lazy grin in my direction.

"Henry, my god man, tell Tess she's pretty as a picture when she's preparing to unleash her wrath on the delightfully unsuspecting father of one of our classmates."

"Yes?" I replied without taking my eyes away from the street.

"You're utterly terrifying when you are plotting something."