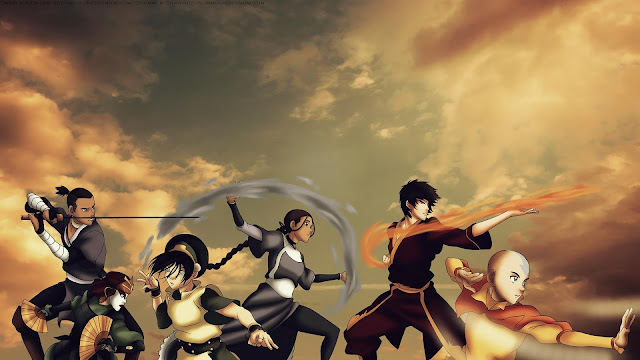 It wasn't so long ago that I watched it for the oh-I-don't-know-how-many times. In honor of that, I was so excited to find out this awesome 'The Last Airbender Book Tag', created by Hannah from A Clockwork Reader.
This is going to be so much fun!
Ready?
Set. Go.

I love sibling relationships (especially the brother-sister bond). And Katara and Sokka are one of the very best.

When I was a little girl I dreamt of having an older sister or brother I can talk with.
Alas, I turned out to be the eldest. And me and my little sister? We could not be more different.
If I was a water bender, she would be a fire bender. If I was an air bender, she would be an earth bender. If I was... well, you get the idea.
I suspect it's why I love sibling relationships in books so much.
Because it's something I always wanted.

In any case, one of the best sibling relationships is of Carter & Sadie from Kane Chronicles.
Aha, those two...

Nothing gets more star-crossed than The Fault in Our Stars Hazel & Augustus.
But as much as I love Hazel & Augustus (*sob*), for my favorite star-crossed lovers it's hands down Clary & Jace from The Mortal Instruments.
Nothing screams 'forbidden' more than their relationship.
Also, I just love them so much.

Blood Bending: a book with a disturbing\unsettling concept

Does it make me disturbing\unsettling if I find blood bending to be cool rather than disturbing?
Maybe I need to lay off of all those TV shows I watch (The Vampire Diaries, Game of Thrones, The Walking Dead, etc.)

It is disturbing what the old lady in Avatar did with the power of blood bending (no doubt there). But I was always a believer that power isn't evil, it's how you use it that determines it.

For a book with a disturbing\unsettling concept, I'm going all the way with The Call by Peadar O' Gulin.
Disturbing and unsettling is this book's middle name.

Toph: a character whose strength surprised you\surprised other characters in the book

There is no denying Toph is at the very top of most badass animated characters.
Especially considering her disability and how others constantly underestimate her. There is nothing sweeter than showing the world you can be the best at something with a disability that would otherwise render you the worst.

Sydney Sage from Bloodlines was one of the most shocking character development I have ever seen.

I love seeing protagonists rising to their true potential. But, usually, it isn't from 0 to awesome. It's mostly from 5 - awesome or 7 - awesome.
With Sydney, it was something special. Something truly epic.
I mean, the girl went from a scared out of her mind of magic and vampires to a vampire's girlfriend and a witch.
Also, super strong and kickass (both mentally and physically).

I don't care what anyone says about the upcoming new trilogy of Magnus Bane. After you read The Bane Chronicles, there is no way you won't want a full Magnus trilogy.

P.S: I really didn't like the Ba Sing Se story ARC. I found it to be even more disturbing than blood bending.

Ah... but practically every fantasy book has warriors in it.
And all I read is fantasy books.

The best warrior award has to go to someone truly awesome.
And that would be everyone's favorite Greek demigod Percy Jackson.
Half boy. Half god. Perfect hero.

I get the urge to shout "Grant Ward should have totally gotten a redemption arc so WHY didn't he?!"
But since we're talking books here, and not TV shows, I shall suppress said urge.

How I love Zuko. I mean-- redemption arcs.
Fine, I mean both.
Just like with every good redemption arc, you start with hating the character, proceeds to sympathizing with them, and ending with desperately hoping for a chance for them to redeem themselves.
That was my exact process with Zuko.
Also with Damon (Vampire Diaries).
And Grant Ward (a redemption arc tat should have totally happened).

Moving out of the TV shows category, I absolutely loved the redemption arc of Warner from Shatter Me. Did not see this one coming.

A redemption arc that should have totally happened (and sort of, yet not exactly, did) is of Sebastian from The Mortal Instruments.
Another one is of Cruce from Fever (though there is still a chance it might happen - if very doubtfully so).

First one that comes to mind is Dumbledore from... wait, do I really need to say from where?
There is only one Dumbledore.

There is also Chiron from Percy Jackson.

The reason I'm not going with characters like Annabeth and Artemis Fowl is because I find 'wise' to be different than 'genius' and 'smart'.
Wise is someone with a lot of life experience. Someone calm and poised who doesn't rush important decisions.
Someone like Dumbledore, Chiron, and Iroh.

Ah yes, Azula's downfall was quite the thing.
Quite the best thing.
I'm pretty sure I hated her so much more than I hated the firelord.

Another best downfall?
Queen Levana from The Lunar Chronicles.
That was well deserved combined with "FINALLY!"
I don't think I was ever that satisfied seeing the bad guy going down.

I don't seem to read many books with fictional animals.
You know what fictional (sort of) animal I really want as my own?
Mister Kindly from Nevernight.
Don't you just want a loyal shadow cat of your own?

It took me a while figuring out what Purest Cinamon roll means.
What I gathered: it means innocent (in a sense).
You know, like a four-year-old little boy or girl are so cute and innocent.

This question could be a problem.
There aren't many innocents in fantasy books. Definitely not in sci-fi. And contemporary? I don't read all that many of these.

An innocent character, huh?
Well... there is Mac from Fever. that being said, she was only the picture of innocence in the first book or so. Then... well, then she became fearless, awesome, tainted Mac.

There is Tyson from Percy Jackson. Never really felt much for him, but he's definitely a pure Cinnamon Roll.

P.S: I love Aang! Isn't he the purest cinnamon roll ever?

If we were talking TV shows again, I would say Emma from Once Upon a Time.
That woman is the most stubborn character I have ever seen on TV.


And that's it for The Last Airbender Book Tag!
I absolutely loved doing this tag. It was such a fun ride.
I also strongly urge you to watch Avatar The Last Airbender if you haven't already.
And if you feel like doing this tag (since it's been around for a while and
I don't know who did it and who didn't) - please do!
See you soon (:
Until then...


"Some friendships are so strong, they can even transcend lifetimes."