* I received this book from Netgalley & Barclay Publicity for an honest review. As always, I only ever write my true thoughts * 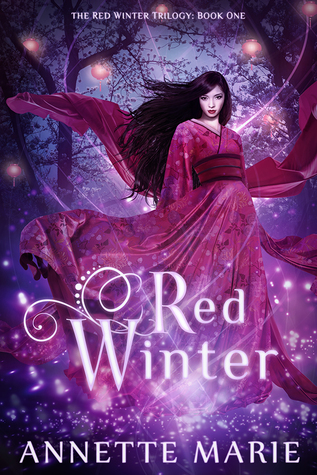 Emi, our protagonist, has been chosen from the young age of 8 to serve as the Kamigakari of Amaterasu - a human host to her goddess.
Now, 10 years later, Emi's time to unite with the goddess is drawing near. That is until she finds out a horrible truth about the union. A truth that was kept hidden from her. A lie she was told to keep her obedient.

That's when Shiro comes in - a cursed Yukai (a demon\supernatural monster) with a past shrouded in mystery.
Both him and Emi seek to escape their destinies. They don't trust each other, but they need each other.
Together... can they do it?

As you may know, I don't typically review books I didn't finish. I also don't rate them, because I feel it's unfair to the book.
But in this case, Netgalley & Barclay publicity were ever so kind to send me an e-ARC of this book I really wanted. I feel it would be unfair to them and the author not to review Red Winter.
And so, I decided to share my thoughts.
This review is spoilers free.

My biggest problem with Red Winter was that I found it to be way too descriptive. Not just the history behind it (which I can understand, as it's the Japanese culture and not something that is very known in the YA book world), but also of places and situations.
It wasn't boring per se, but I did find myself, countless of times, with the urge to skip those too long paragraphs of descriptions.

Despite finding it to be too descriptive, I didn't necessarily find this book slow-paced or boring. It was a book I could see myself reading and finishing, but not thinking it was wow.

Emi was a likable character and I liked Shiro's playful personality, but... I didn't really connect with them. I didn't much feel for them.

I found Emi to be a little bit too logical and timid. Which I could understood as we got to hear about how she grew up. She was not allowed to do much of anything other than pray. No wonder the girl, even at 18, was way too timid and sheltered for comfort. But I  did feel it prevented me, the reader, from connecting with her.

Also, it felt like it took way too long for Shiro and Emi to meet.

If I had to describe how I felt about this book in one word, it would be: neutral.
Which isn't bad but also isn't good.

Overall, this book was an enjoyable read.
I also absolutely loved the illustrations. They were magnificent and so much on point that I felt like they came our of an anime.

I would recommend this book to anyone looking to relax with a YA book surrounding the Japanese folklore.

The opposite of love is not hate, it's indifference.