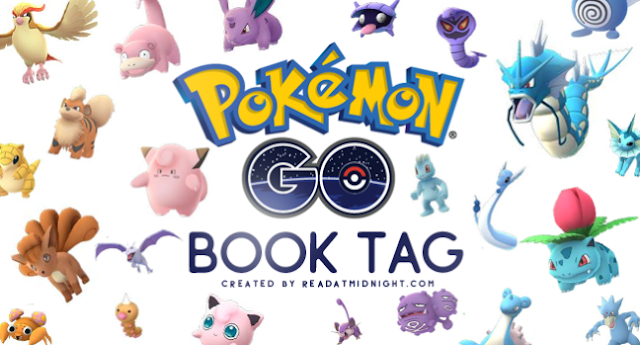 Yeah, I know...
I'm kind of late to the party of the Pokemon Go shenanigans.
Then again, I was always a firm believer in the saying 'better late than never', and so here I am with the Pokemon Go Book Tag!

This tag was created by... Aentee from Read At Midnight.

I never got to play the game, by the way.
So sad. Long story short: my phone did not allow me to download the game. I tried, but it fought back.
The phone won at the end, I'm afraid.
True story.

Now that we got that out of the way, to the tag it is!

I've been reading books for as long as I can remember, but from just reading to being a book reader, I owe everything to Percy Jackson and the Lightning Thief by Rick Riordan.

That book started my love for reading and for fantasy.
From the very first page, it was the most amazing adventure I ever had.
Percy Jackson was the first book to leave its mark on me.

Ah... well...
I'm actually not really a fan of classics (sorry, fans of classics!).
I know a lot of readers also love the classics, but me and classics were just never meant to be.

I don't want to leave it blank, though, which is why I'm going to go with: The Chronicles of Narnia by C.S Lewis. Haven't read the books (shame on me, I know), but I watched the movies, and the story of Narnia (past and future both) is one I know I'll always love (and always want more of).

You'd be surprised how quickly you can lose interest in a book just because everyone talks all about it.
It's intimidating. Weirdly enough, because everyone in the universe seem to love it.

You feel like everyone have been brainwashed to love it. After all, how is it possible every human being you meet, loves this book?
You end up deciding to read this book later.
As you keep hearing all about this book and keep seeing it everywhere, that later somehow becomes "probably never."

There are so many books I can add to this list, like: My Lady Jane but Sarah J. Mass's books are the most intimidating of them all.

Honestly?
Nothing comes to mind.
I know-I know, it's not that I never read books that are very similar in concept to other books. It would be impossible not to. It's just that... I'm not good at comparing books to one another. And when I say 'not good', I mean that my mind never really compare books to each other as I read them.
Which is why I can't seem to think of anything right now. Especially not a book that I love despite it being similar to other books. I never love a book despite. I love a book because.

I'm not really the type to be intimidated by the size of books.
If I really want to read a book, I will read it no matter how long it is.
The only thing that would intimidate me it too many descriptions\slow-paced, and then I would be like: "1000 pages long with lots of descriptions? No thank you."

And... well, there aren't that many HUGE books.
Most of the books I read are somewhere between the range of 200-400.
The longest book I read? I think it was 700-something pages long.

But then there are books like Game of Thrones. The seize of this book is truly frightening.

Reading books at night Isn't good for me if I actually want to sleep.
It's like a shot of adrenaline right to the brain. No way am I sleeping after that.
So when I was still in high-school, I had to stop reading at certain hour so I'll actually be able to sleep and not walk around zombie-like all day at school.
I was pretty good at stopping myself (despite how much I wanted to keep reading), but then there was that one time... I just could not stop myself.
And it was with a book I bought on a whim and didn't expect anything out of - Rush by Eve Silver.
I'm not kidding when I'm saying I read it in a rush.
It was beyond addicting.
And the writing style, and characters, and plot...
Just read it. You'll thank me.

It would be an impossible task for a shipper to pick just one bookish OTP, for goodness sake.
Then again, it would also be impossible to name all of a shipper's bookish OTPs. Hmm.
I'm going to find a middle ground here my naming a most recent addition to my bookish OTPs.
*ahm-ahm*
Mia & Trick from Nevernight.
Those two are just... *half-happy, half-frustrated sigh*

Most definitely the Fever series by Karen Marie Moning.
This series is basically the definition of Fire-hot, Fast-paced read.

Also, Riders by Veronica Rossi.
There is a burning horse on the cover for a good reason.
This book is both fast-paced and fire-hot like you wouldn't believe.

Say what you will, but I honestly don't think I will never-ever-never tire of seeing spin-offs in the Shadowhunters world (by Cassandra Clare).
Nope, definitely not.
And that's exactly what we're getting - more spin-offs!
I couldn't be happier about it.

Hmm... I think I'm going to go with The Lunar Chronicles by Marissa Meyer on this one.
When I first read Cinder, I never expected this series to turn out to be as epic, kickass and awesome as it did.

Cinder was just the beginning. Each book after it turned all the tables and brought the series to a whole new level.

Nope, I'm pretty sure most over-hyped series more intimidate me than excite me.
I can't seem to think of one I'm more excited than scared to read *laughing awkwardly*.
So I'm going to go with an over-hyped anticipated release that no matter how high the hype is getting, I'm still ridiculously excited about it.
Caraval by Stephanie Garber.
The hype around this book is insane, and only fuels my need to read it!

I'm really not the type to collect book editions.
As long as I have the book in my hands and the words in my head, it's all I need.
I never felt the need to collect multiple editions of a book, or a collector's edition.
words, words, words... that's really all I need.
Of course, if I had the money, maybe I would have indulged myself in such an expensive hobby. If I'm ever going to collect something, it's going to be books.
Not that I don't collect enough already without buying multiple copies so...

You wouldn't believe how many amazing sounding debut novels are about to come out in 2016 & 2017.
It's going to be insane. The good kind of insane.

The reader by Traci Chee, Timekeeper by Tara Sim, Fear the Drowning Deep by Sarah Glenn Marsh and Daughter of the Pirate King by Tricia Levenseller are just a few of them.
There are so many more, you guys.

For more anticipated new releases, you can check my goodreads TBR.

I would buy anything - and I do mean anything - Cassandra Clare ever writes.
She's on the very top of my 'buy first, ask questions later' authors list.

The most recent addition to the list is Jay Kristoff.
Yep, I would buy anything this guy writes. Ever.
After Illuminae and Nevernight... I do not need more convincing. Jay Kristoff has my trust.
A dangerous thing, I'm sure, to place trust in someone like Jay Kristoff.

It feels like I've been waiting on Gemina (by Jay Kritoff and Amie Kaufman) for eternity now.
And you won't believe this but I was lucky enough to win a giveaway of an ARC of Gemina (from this blog) that is supposed to arrive soon.
And I'm just... *all the feels*. And that's before reading the book.
This is going to be epic. I can feel it.
And probably destroy me. I can feel it too.

And... that's it for the Pokemon Go Book Tag!
I feel like everyone has done this tag already so I won't be tagging anyone in particular.
If you're, like me, late on this tag, consider yourself tagged and motivated by me to do it.
This was a particularly fun tag to do (and I know - I did so many tags in my 6 months of blogging).
About Pokemon: I actually started watching the anime. Very enjoyable so far. Can't believe I haven't watched it sooner.
Well then, I'll see you in my next post (:
Until then...

My team - an actor, a drunk, and a sociopath - didn't exactly inspire confidence.