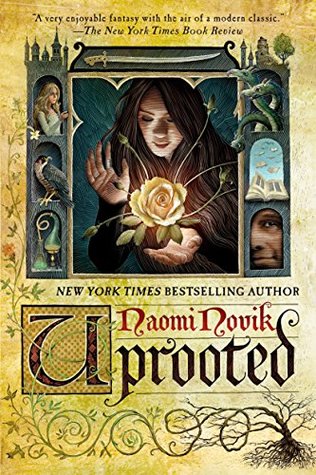 I went down with him. We banged our heads on the flagstones together, and dazed lay still for a moment with our limbs entwined. The fire was leaping and crackling beside us, and as my panic faded, abruptly I noticed that in the wall beside it were small iron oven doors, and before it a spit for roasting, and above it a huge wide shelf with cooking-pots on it. It was only the kitchen. After a moment, he said, in almost marveling tones, “Are you deranged?”

I feel bad rating this book so low.
I always thought this kind of rating is for books you hated or something, but that's really not the case here.

To describe uprooted in 1 word: Rich.
The worldbuilding was rich, the story was rich, the magical system was wonderfully expressive, and even the writing style was engaging (if a bit too descriptive, and low on dialogue).

But that's all if I were to speak from a logical point of view.
I can see what makes this book so popular. I can understand why people would love it.
But I don't feel it.

Breakfast at eight, dinner at one, supper at seven. Leave the meal laid in the library, five minutes before, and you need not see him—no need to say who—all the day. Courage! Priceless advice, and that Courage! was like the touch of a friend’s hand.


I just felt like I didn't truly get to know these characters.
The Dragon, especially, but also Agnieszka (despite seeing everything about her). I just didn't connect to them, found nothing to latch on.

“Listen, you impossible creature,” he said, “I’m a century and more older than—” “Oh, be quiet,” I said impatiently; of all the excuses he might have used.


And then there's the "romance".
Now I understand that this is a book mainly revolving around its plot and magic, not the romance, but I hoped I could have at least had something to latch on through there, considering it is very much tagged as a romance on goodreads... and as it seems to be a bit of a "beauty and the beat" vibe.
Unfortunately, no.
If you count the romance in the whole of the story, it would be summed up to 2 chapters in this entire book.
Where are the feelings? Where is the build up? Where is the "caring about the other"? And more importantly where is the satisfying ending?
Can't believe I'm saying it but even insta-love would have been better.

So since I ended up not being able to enjoy neither the plot (due to not connecting with the characters), nor the romance... there really wasn't much left for me to enjoy.

I would say this though: I did find the friendship between Agnieszka and Kasia quite wonderful.

“You intolerable lunatic,” he snarled at me, and then he caught my face between his hands and kissed me.